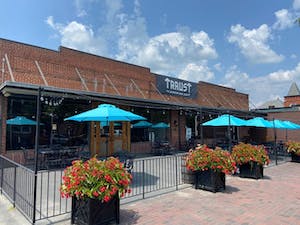 Headed by couples Guin Bell and Eric Stevens, and Aldo and Lori Brozzetti, Traust began making beer in the former Thirsty Nomad Brewing location in Charlotte’s South End during summer 2020. The owners hoped to open a taproom in a different spot and initially sought Charlotte until learning about downtown Mount Holly and the potential sale of South Main Kitchen.

“If you look at the circle around Charlotte… Mount Holly is the last area of the pie that hasn’t seen a lot of action,” said Bell, a 37-year-old Charlotte native and beer buff.

Upon walking into the Mount Holly restaurant for the first time, she knew it had the most potential out of any other prospective space in Charlotte. The property and business, as well as some of South Main Kitchen’s employees, transitioned over to Traust in July.

“It fell into our laps. I walked in and I just knew.”